Data sharing apps like SHAREit have transformed the file transfer game, allowing users to transfer files through WiFi without a network connection.

The app’s key benefit is that it allows users to transfer large files to each other quickly–no cords, cables, or USBs required. Today, there are more features in the mix, a music discovery app, a place for finding video content, the list goes on.

Below, we’ll take a look at where the file-sharing app stands in 2019, and whether it’s still a good choice for those looking for a quick way to move files around.

So, what is SHAREit?

SHAREit runs on a technology known as WiFi Direct to support its file-sharing system. How it works is, it sets up a local WiFi network that allows people to share files back and forth—though there are some limits when it comes to range and how many users can access that network.

Users can control who can send and receive files over the signal.

There are some risks associated with transferring files in a public space over questionable WiFi connections, and it’s worth pointing out that the platform was found to have some significant security issues earlier this year.

One notable issue was, hackers could gain access to auto-fill data, Amazon web-service user key and the victim’s hotspot info in plain-text by with a simple curl command.

Still, the app boasts 500 million users globally, and the app is a convenient tool for users to share data, particularly in areas where mobile data transfers are both slow and expensive.

How to send files on SHAREit

To send files to another user, make sure you indicate that your device is the sender, then add the files you plan on sending by dragging and dropping them into the app.

Once sent, the receiver accepts files, and they’re saved in the device’s Downloads folder and My Files inside SHAREit. Photos typically save inside your Photos folder.

Both devices must have SHAREit installed and running during the transfer and be connected to WiFi. 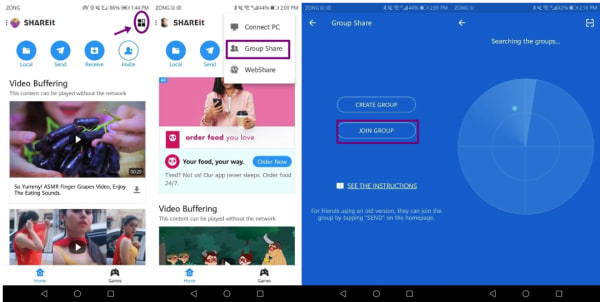 SHAREit’s group feature allows you to receive files from multiple users at a time.

Users can join groups created by any user and receive files from members of your groups.

Here’s how you can get in on the action:

If you’d like to create a group of your own, you’ll press the Create Group button instead and wait for other users to join. Group creators can kick people out of the group, though it seems that there aren’t any limits on who can join.

Web Share allows users to send files to someone who doesn’t have the app downloaded to their device.

The receiver gets a link that provides access to the file and can save them however they see fit.

How to back up files on the Cloud with Google Drive

Share Zone is a mobile feature offered on both Android and iPhone. It allows you to select files that anyone can see when they connect to the platform and works as this community library of sorts.

Add and remove files from the Share Zone by tapping on your avatar and navigating to Share Zone.

Even if you don’t need to send files back and forth regularly, SHAREit can still bring some value to the table. Recent updates have opened up more features like streaming, a media player, and a multimedia app.

SHAREit offers a handful of utility apps inside the main account. Here, you’ll find tools like CLONEit, a tool made for transferring your files, apps, and contacts from your old phone to a new one, without using up your mobile data.

Okay, this is a bit weird, but there’s not a lot of information out there about how the media player works or whether or not people like this aspect of the platform or would rather see SHAREit stay in its lane.

Per Google Play, the app comes with “infinite” online watching and select offline watching. It also comes with a built-in music recommendation engine, plus GIFs, stickers, and wallpapers.

Even though SHAREit was designed for file transfer, the app is angling to become something of a streaming platform.  Inside the content preferences tab, you’ll have the ability to customize the content suggested by the app.

To set your preferences, simply tap your avatar and choose Change Content Preference. From there, you can pick from these rather broad categories and save your changes. 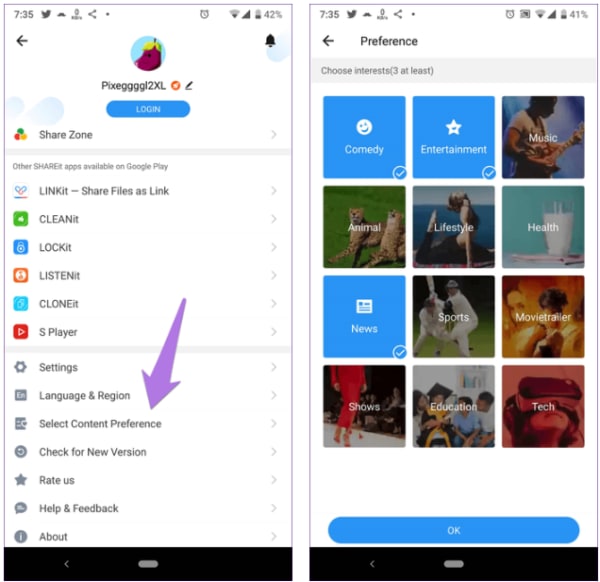 Is SHAREit still worth a shot?

It’s honestly hard to say. It could simply come down to the fact that the app isn’t as popular in the US as it is in other countries, but there’s little information out there about how to make the most out of the platform–half of the developer blog posts amount to a brief mention of a new update or something equally useless.

What’s more, review sites from all over the web mention dip in quality in recent years. Android Police, Reddit, and the Play Store all have reviews that mention that the platform is too bloated and contains too many ads.

The Most Popular Mobile Apps Downloads Of 2022